The only F words that should offend are Fast Fashion 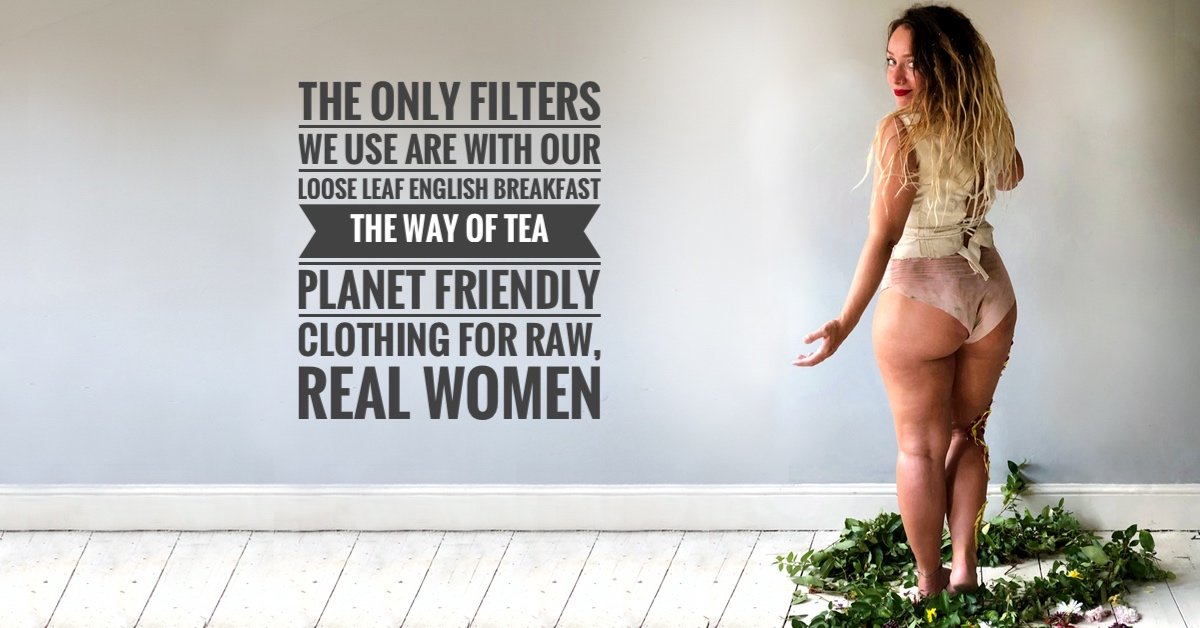 A few days ago I created an advert. Well, two adverts really. One with boobies, one with a bottom. With the intention of showing off women’s bodies in a way that doesn’t filter the beautiful things that make us individuals. We’re bombarded, obliterated, dissected and reduced by the media – this bit is ugly on you, look at your lumpy, stodgy bottom. Here, I’ve got a cream for that, it costs £50, rub it on your lumpy bottom and soon you’ll look like this other person who isn’t you that we’ve airbrushed to look not like her either. Look how happy and loved she is and how much she loves herself. This cream is love.

Simple, easy. Create self hatred in women so they buy shit from you that doesn’t work. Perpetuate their self hatred even further because it doesn’t work, making them believe they’re the only person it doesn’t work for (I don’t look like the cartoon in the picture so I must be extra ugly and lacking). Deepen their hole of self loathing, then show them the next bottle of lies that will smooth out their imaginary problems. And again, and again, and again, and again. Boom, surgery epidemic, fucked up make up that makes women look like real life Photoshop filters and entire generations of self loathing women raising the next generation on an ulcerated foundation of media inflicted wounds.

So I posted an ad and I used the word fuck in it, because it’s strong and my passion about this topic is strong. My passion about fast fashion and all it stands for – that is, the despicable way humans and the planet are treated from the beginning to the end and beyond the life of the garment – is strong. So my language needed to be as well. The ad got pulled – because of fuck.

Fuck got removed but fast fashion is allowed. Fast fashion is killing people. Literally. The model is all wrong. We used to have seasons – you know, those quaint little things with flowers and leaves and rain and snow with differing temperatures that warranted different types of clothing covering our nakedness to differing degrees in order to keep us warm, cool, dry, all whilst amplifying the best version of ourselves. Clothing is important. Most humans on the planet wear it. Apart from practical concerns it helps us display who we are. Or it did – until relatively recently.

Now we have 52 micro seasons and ‘buy this to look like someone famous’. What the fuck? What’s wrong with looking like me? Keep them buying. Make them see their new stuff is old. Throw it away – you’re so last season. You’re not cool, you’re not accepted, you will certainly not be popular and if you’re not popular or look the way we say you should you will most certainly not be LOVED.

Because really, that’s what we all want deep down. Isn’t it?

Women are being attacked by fast fashion. Our lumpy bottoms are only one end of the spectrum. In an article about women in the garment industry last year, Anika Rahman wrote, ‘in 2014, the textile, clothing and footwear sector worldwide was estimated to employ about 60 million to 75 million people, three quarters of whom were women’. And guess how many women are leading the top 15 largest mass-market apparel companies? You guessed it – zero.

The majority of women in the fast fashion industry are underpaid (in Bangladesh many women are paid around 26p per hour), undervalued, working in unsafe conditions and vulnerable. Many are beaten, sexually harassed, have only a few days off a year and have to live across the country away from their children. Many work 14-16 hours a day SEVEN DAYS A WEEK in peak times, with only a few days off allowed per year. So those few days off they have a year may be spent travelling with the little money they earn to see their babies that are being raised by their village with the tiny amount of money they’re able to send home.

In contrast, it takes the CEO of the world’s leading top fashion brands FOUR DAYS to earn what a garment worker will make in their whole lifetime. (Oxfam, 2018).

The tops they make cost, say, £6 in-store (in 2017, Oxfam Australia stated that only 4% of that goes to the workers who make the garments) and the hard work of the whole production line, including Mother Earth who works so hard to grow the materials, is thrown away after 1 year (McKinsey, 2016). The machine that is fast fashion has convinced the women on the other end of their abuse that they’re ugly and the next £6 top will make them beautiful.

And so continues the cycle of abuse.

Women the world over are in an abusive relationship with fast fashion – emotionally, psychologically, financially and most devastatingly – physically. The most well known being the 1138 people who died and 2500 injured due to the collapse of the Rana Plaza factory in Bangladesh in 2013.

‘The year after the Rana Plaza disaster was the fast fashion industry’s most profitable yet’ (The True Cost).

So yes, I said fuck fast fashion. Because yes, fuck it. But Facebook said no, fuck is not allowed, Libby said a bad word, shut your mouth Libby, say it in more ladylike language please. You are a lady after all. Get back to the shops and shut your mouth.

Well fuck that filter too. And fuck the filter that stops us seeing what’s happening to these men, women AND CHILDREN making our clothes. We need to break the rules, do things differently and shout for change. The industry is earning too much to change the actual underlying cause which is the model itself – and most don’t give a shit anyway. I went to a talk in London around 18 months ago marketing itself to be about sustainability. It made me sick. It lied. In fact, one spokesperson from Rebecca Minkoff, when discussing making the trail of production visible, actually LAUGHED when she said ‘oh we want to see if someone’s died’. Hahaha.

Ha ha FUCKING ha. Is it funny? Someone with a family and a life and passion and beauty and substance and interests and love and a home and working hands that made your clothing has died in the process and you’re sitting there in front of a room full of people and you laugh?

I didn’t stay for the celebratory canapés and Prosecco.

So what can we do? Buy less, buy better, mend it, upcycle it, swap it, learn to love what we have instead of what we have not. Exit the cycle of abuse, love yourself first. Clothing is wonderful. It is important. It is, as Orsola De Castro says, ‘our chosen skin’. It takes incredible skill, creativity and imagination to create it. But the industry is abusive. And the beauty is getting lost amid the abuse.

‘Every human needs to be clothed, so let’s at least do it fucking consciously’. (Bygrave, 2019).

So I’ve dumbed down my advert but as a result I’m speaking my mind where I’m ‘allowed’ more loudly. Accompanied by my lumpy bottom which I happen to like. I hope you like yours too. With or without the media telling you that you need these particular tights made by the hands of a woman in pain to hold it all in. 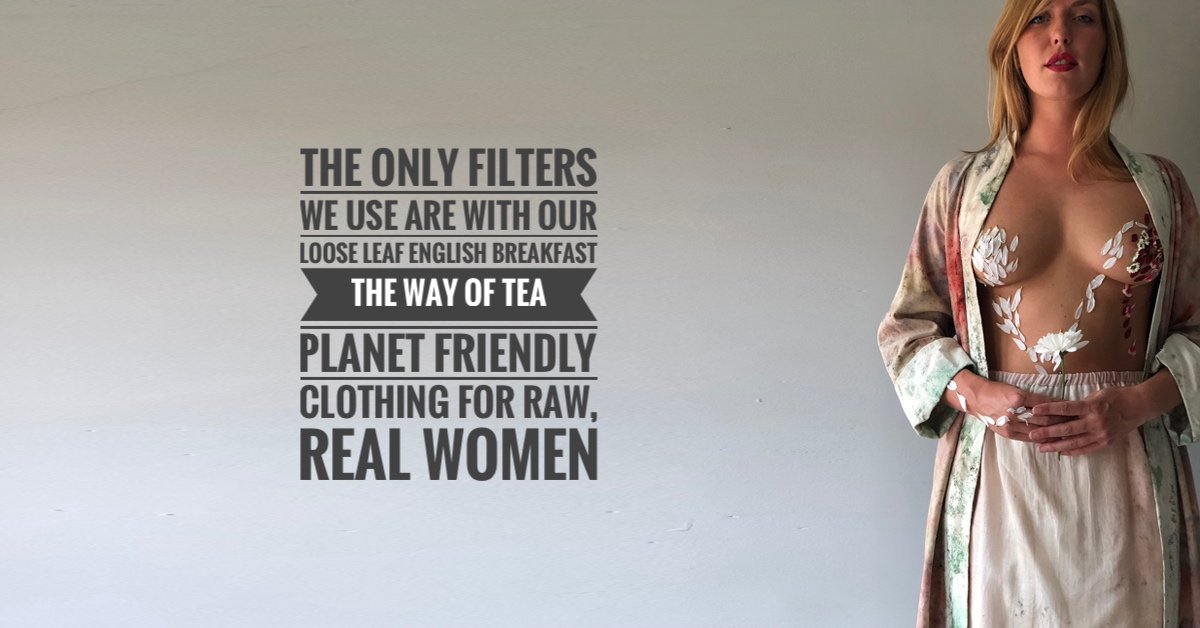